A squeeze on rest breaks in the workplace of all kinds has gathered place in the last decades. Unpaid breaks, or no breaks at all are now increasingly common in the UK. The British Trades Union Congress (TUC) estimates that a total of five million workers now put in an average of 7.4 extra unpaid hours per week. Over a full year for the whole UK economy this amounts to two billion unpaid hours of effective overtime. The squeeze embraces lunch breaks, tea breaks and even toilet breaks. A survey of just over 2000 workers taken in 2017 by workthere recorded an average figure of 34 minutes for a lunch break in the UK but also recorded that many workers now skip their lunch break altogether, and simply eat at their desk while continuing to work. Tea breaks have long been under attack. Strikes in the UK auto and engineering industry in the 1970s and 1990s were often focused on employer attempts to take away such breaks, and since then it has become common practice in other areas such as retailing where big supermarket chains Sainsburys and Asda now insist that tea breaks are unpaid. Paid time to take a toilet break is now a serious area of workplace grievance. Unite the Union has published a report coinciding with World Toilet Day in which it provides evidence of staff at branches of big high-street banks being required to urinate in buckets, and construction sites failing to provide any female toilets. Bus drivers had been denied toilet breaks for up to five hours, and workers in call centres for big financial institutions were told to log in and out to take a toilet break.

The root cause of the squeeze on rest breaks is located in intensified global competition and falling rates of profitability that emerged in the late 1960s. Employers have sought a new regime of capital accumulation (otherwise described as the neo-liberal era of capitalism) in which employers no longer felt the need to abide to the agreed ‘rate for the job’ designed to standardise reward for skills in national labour markets. National collective agreements with trade unions, which preserved rest breaks, began to be threatened as employers sought ‘more for less’ from their workers. Added to this, increased digitalisation and its associated aspects of monitoring, surveillance and control has exacerbated the density of time at work, and hence our need for relief from stress and burnout. Time is broadened and density increased within clock time because snatches of time can be used to look at mobile messages or the computer screen and respond to them while working on something else at the same ‘time’. For employers the resultant risk of time pressed stress among the workforce has legal implications in terms of Cognitive Overflow Syndrome, a newly identifiable legal term to assess the resultant sense of being overwhelmed and stressed. Such legislation is vital to workers’ health, and in France pressure from trade unions has led to a change in the law allowing employees the ‘Right to Disconnect’ from emails and texts once away from work. Avoidance of protective legislation, such as those contained in the European Working Time Directive, is a temptation for employers.  According to the Unpaid Britain report examples of avoidance are suggestive of ‘employer delinquency’ whereby the search for profits through super-exploitation of the workforce outweighs the risks of being caught and fined by regulatory authorities.

The Smokescreen of Mindfulness

Rather than restore rest breaks and give time for workers to recover and recuperate a plethora of mindfulness and well-being programmes are currently being touted by consultants to employers in the UK and elsewhere. Yoga and meditation are undoubtedly positive ways to increase personal feelings of well-being and keep the mind in tune with the body. However, there is also an ethical dimension, as sufficient time is needed for such practice to work, alongside the creation of a particular mind-set that allows healing.  But are employers abusing the beneficial effects of this practice and corrupting its use with short term bursts at the work- station? Have employers, as Žižek suggests, attempting to help people under time stress ‘to fully participate in the capitalist dynamic while retaining the appearance of mental sanity’? For example, at a recent conference supported by organisations including the Chartered Institute of Personnel and Development and the mental health campaign MIND a session was held on Managing the implications of ‘any time, any place’ work. The solutions proffered were ‘wellness’ and ‘wellbeing’ programmes designed to increase personal ‘resilience’. The Stress Management Society go so far as to suggest that consultants may be brought into the workplace to offer ‘desk massage’ and ‘desk yoga’. The responsibility for the symptoms of stress in these programmes are placed back to the individual. Nicole Aschoff (2015) in her book The New Prophets of Capital chimes with this theme and writes that the super-rich such as Oprah Winfrey and Melinda Gates suggest we must examine our inner self or promote charity to alleviate poverty and inequality. Ronald Purcer in his new book McMindfulness (2019) pursues the theme suggesting that ‘corporations, schools, governments and the military have co-opted it [mindfulness] as technique for social control and self-pacification’.

However, some employers appear to have grasped the negative effect on productivity of new pressures on our time at work by allowing employees to schedule their own hours to complete set tasks over a four-day week, or by working remotely more often from home. The accountancy corporate PwC offers employees contracts lasting a set number of days to complete designated tasks.  The Wellcome Trust is trialling a four-day week and some smaller companies in the creative and design sector are offering the same, hoping to counter the effect of ‘Friday fatigue’. There are limits to the phenomenon of acting without supervision. Yahoo! (now part of Google) announced in 2013 its intention to stop working from home because, as Jackie Reses, human resources director, explained ‘Speed and quality are often sacrificed when we work from home…..We need to be one Yahoo!, and that starts with physically being together’. After many years of decline in time allocated to tea breaks and lunch breaks (and even toilet breaks) a new trend has emerged to introduce Swedish-style fika coffee breaks into the modern British workplace.

The return of the coffee/tea break, while rare is not unprecedented. The New York Times reported in 2014 the case of Bank of America call centre and a pharmaceutical company. A 15-minute coffee break was introduced in the call centre and the pharmaceutical company replaced coffee makers with a larger café area. The newspaper records: ‘The result? Increased sales and less turnover’.  The rationale behind initiatives such as fika are in fact twofold. First, employers have rediscovered the ‘human relations’ approach to personnel management, whereby short bursts of time socialising with work colleagues are supposed to boost workers’ self-worth, enabling them to work smarter and more creatively. Second, the propaganda from the coffee companies, many of whom offer consultancy programmes to employers, praise the benefits of caffeine intake in boosting workers’ energy levels. It is reminiscent of employers offering sugary tea to their workers in the late 18th century as the factory system boomed in Britain. Tea was offered as a stimulant and as an alternative to the watered down or ‘small’ beer normally drank in the absence of clean and un-polluted water.

Slide Down a Shute!

The portrait of the grim modern workplace, overseen with new forms of monitoring, surveillance and control is also being challenged. The gig corporations, otherwise known as the FANGs (Facebook, Amazon, Netflix and Google), are at the centre of increasing temporal density in their prestige HQ and research centres while at the same time exercising extreme temporal flexibility in their outsourced service operations such as Amazon Mechanical Turk. Google’s headquarters office in Mountain View, California is designed so that staff are never more than 150 feet away from a micro-kitchen. Staff can take advantage of free transport to the workplace where they find on-site massage parlours, a games room and swings and ball pits. A micro-swimming pool in which the water flows in the opposite direction to your strokes creates the impression of swimming a lap. Staff have the right to take their dog to work (cats are not allowed as it is decreed that it would be too stressful for them). 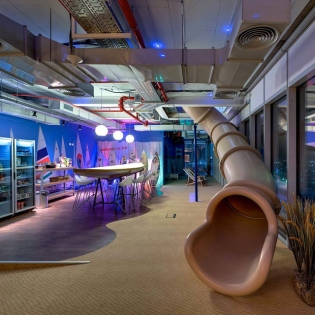 To avoid walking down the stairs staff can slide down a shute. Induction of new employees even consists of a ‘New Employee Orientation and Arranged Virginity-Loss Night’. Of course, if all these fun and games don’t make you happy and more productive at your work you can always join Goggle’s mindfulness programme, established by Chade-Meng Tan who was given the name Jolly Good Fellow while at the company and would encourage you to ‘search inside yourself’.

Facebook’s engineering HQ in London has 1000 employees with sleep pods to enable time to snooze, artistic workshops with a resident artist, games room (billiards, table tennis, football tables), micro-kitchens and a canteen with free food to which you can bring friends and family.   The privileges are framed within an employer strategy which assumes that money spent on staff benefits will buy employee loyalty and help to keep collective worker organisation at bay. Creative and high skilled workers are thus given a degree of ‘responsible autonomy’, previously identified by industrial relations academics in the 1970s as a managerial strategy fit for purpose within large scale monopoly capitalism.  Rather than separate working and non-working life the FANG approach appears to embrace non-working life aspirations by incorporating them into the working day. Life becomes work and work becomes life. Fun, games and nice food are utilised to bind the company ‘associate’ to corporate objectives.

For workers the net result of is a potential worsening of the experience of work, squeezed by new contractual obligations, new (and renewed) ideological pressures and new forms of monitoring, surveillance and control which restricts their formal opportunities for time ‘off-the-line’ as well as possibilities for them to subvert the employers’ control of time by informal means. This is not to say that resistance is impossible, but simply to admit that the space for subversion of the time-discipline imposed by capital has become more restricted. However, even within this new world of digital artisans staff have begun to self-identify as ‘workers’, rejecting the corporate goals of the giant companies and even making common cause ‘with the cleaners and baristas that serve them’. This is even true in China where workers in tech giants such as Huawei and Alibaba have sparked a national debate of long hours culture by exposing the supposedly illegal practice of being required to work 9am to 9pm, six days a week.  Supermarket workers have begun through their unions to fight back against employer attempts to take away their tea breaks and striking couriers in the gig economy have started to organise against the vagaries and discipline of the .app. Our tea and lunch breaks are precious and cannot be replaced by employer delinquency or half-hearted attempts to placate our minds with workplace yoga, mindfulness or fun and games with colleagues. Resistance is surely not futile.